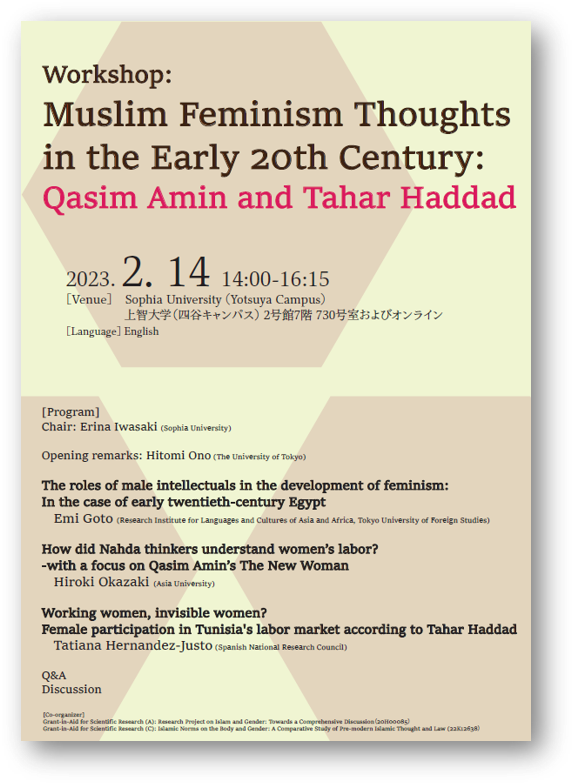 This workshop will discuss the emergence and development of the ideas of women's liberation in Arab societies, comparing Egyptian jurist Qasim Amin (1863–1908) and Tunisian reformist thinker Tahar Haddad (1899–1935). The first presenter, Goto, will focus on how Qasim Amin's messages were received and developed by later Egyptian women's activists and describe the flowering of feminism in Egypt. Okazaki focuses on women's labor in Qasim Amin's book The New Woman (1900) and shows how it led to the Tunisian reformist thinker Tahar Haddad. The final presenter, Hernandez-Justo, examines Tahar Haddad's work, Muslim Women in Law and Society (1930), to examine how Tunisian women's labor was perceived at the time.

14:05-14:25
Title: The roles of male intellectuals in the development of feminism: In the case of early twentieth-century Egypt
Speaker：Emi Goto (Research Institute for Languages and Cultures of Asia and Africa (ILCAA), Tokyo University of Foreign Studies)
This presentation considers the role of male intellectuals in early feminism by focusing on Qasim Amin. While Amin has been hailed as the “father of feminism”, his writings have also been criticized as reflecting (false) feminism rooted in colonialism. In this presentation, I examine the assessments of Amin made in the writings of two contemporary female activists: Huda Sha’arawi (1879–1947) and Nabawiya Musa (1886–1951). For them, Amin’s writings were both inspiring and lacking some elements, to bring about a new society in which women live better lives.

14:35-14:55
Title: How did Nahda thinkers understand women’s labor? -with a focus on Qasim Amin’s The New Woman
Speaker：Hiroki Okazaki (Asia University)
Ideas of women’s liberation in the modern era have been linked to labor theory in both the West and the East. I will focus on how women’s labor was argued in Qasim Amin’s The New Woman (1900) and how it was later connected to the ideas of Taher Haddad. I will examine then how the relationship between women and labor has been discussed in Nahda’s thought since Tahtawi, comparing it with the history of women’s liberation thought in Western Europe and Japan.

15:15-15:45
Title: Working women, invisible women? Female participation in Tunisia's labor market according to Tahar Haddad
Speaker：Tatiana Hernandez-Justo (Spanish National Research Council)
Tahar Haddad was a modernist scholar renowned for his contribution to trade unionism and female emancipation in Tunisia. He was active at a point in time in which said issues were cornerstones of the reformist debate as well as of the nationalist struggle. Having published books on both of them, our aim with this presentation is to analyze Haddad’s views in hopes of understanding the links between the two, what it was like to be a Tunisian working woman in the 1930s and how they were viewed by society at large.